Australia is known for breathtaking beaches, Africa has Sahara desert and love birds love to lock arms amidst the beautiful valley in Switzerland. But, there’s a big BUT! The innate nature of humans is to taste different fruits at once and at the same place. The only solution to their diverse desires is INDIA, undoubtedly! Yes, with a coastline stretching up to 7,516.6 km, we have beaches, valleys, deserts and a lot more. Just imagine if the topographies are so diverse what about the extent of its cultural diversity? To know more just hop on to my magical carpet and let me take you to the land of Karma – India, also known as Bharat and lots of festivals celebrates here and one of them is Kumbh Mela. 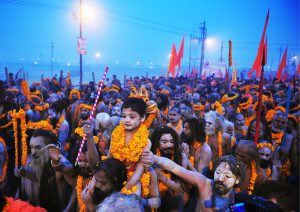 TO GO WITH AFP STORY BY ADAM PLOWRIGHT

Sadhus or holy men (L) carry a child adorned with marigold flowers on their shoulders as they all march towards the Sangham or the confluence of the Yamuna and Ganges rivers during the Kumbh Mela in Allahabad on January 14, 2013. Hundreds of thousands of Hindu pilgrims led by naked, ash-covered holy men streamed into the sacred river Ganges on Monday at the start of the world’s biggest religious festival. The Kumbh Mela in the Indian town of Allahabad will see up to 100 million worshippers gather over the next 55 days to take a ritual bath in the holy waters, believed to cleanse sins and bestow blessings. Before daybreak on Monday, a day was chosen by astrologers as auspicious, hundreds of gurus, some brandishing swords and tridents, ran into the swirling and freezing waters for the first bath, signaling the start of events.

We have festivals throughout the year. While for some, festivals are solemn affairs others count it as a reason to celebrate happiness. Apart from the major festivals like the Durga Puja, Eid, Diwali, etc. folks festivals too are of great importance : 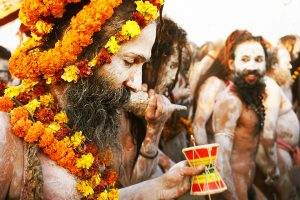 Kumbh Mela can be seen from space and in 2001, 60 Million people had parti

From LITTLE CHOKHA to DOSA and KORMA to

SHORBA, you will get it all here!

With all exotic ingredients, unfamiliar tastes and tingling flavors, Indian cuisines are both exciting and intermediating, be it the North Indian, Mughlai or the South Indian. Starting from Shree Khand to Daulat ki Chaat we have more than 140 varieties of desserts.

Philosophy Runs in the Blood 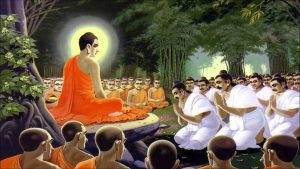 Ample of philosophies and religious beliefs exist here but Ahimsa (non-violence) is a universal philosophy that is common in all and has kept the country united. 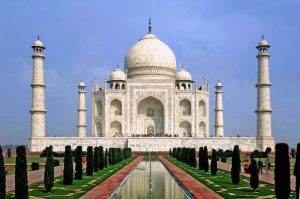 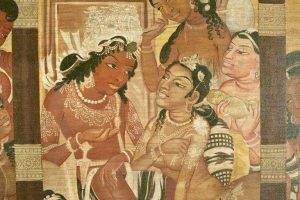 There are 3,685 monuments in India. Your device storage may fill up taking selfies, but the monuments here will never fail in pleasing your eyes! Of course, we have the great TAJ Mahal but there are many other masterpieces that are worth visiting. Cave paintings from Ajanta, Ellora, and Sittanavasa testify to a love of naturalism. Brihadeshwara temple in Tamil Nadu is the first granite temple in the world.

Originated in Bihar, The Mithila painting also known as the Madhubani painting is in demand across the globe. Millennials here know to maintain a balance between their culture and modernization.

Be it the Mars mission or tourism, hyping up the price is not an Indian’s area of interest so nothing to worry about, as the tourism expenses are pocket-friendly. So now get down off the carpet and experience the colorful culture of India, with VAGABOND HOLIDAYS!!