New Year is just the right time to treat yourself to a serene, astounding trip in lap of the nature, far from the hustle and bustle of the city.

Everybody deserves to wake up on 1st Jan and witness the sun rising from behind the snow capped mountains that could energize the most tired of hearts. And that is precisely the reason why you should considered spending your New Year in Kanatal. 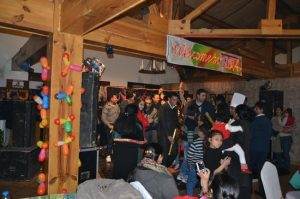 Kanatal is a small village in Uttarakhand. It is located 78 kms from Dehradun, the capital of Uttarakhand and 38 kms from Mussorie, another beautiful heaven. Kanatal is well connected to both the major cities by road and buses and taxis are easily available to reach Kanatal.

Kanatal is your dreams you didn’t know are true.

In summers, Kanatal experiences a temperature of 10-20°C while in winters it could drop to as low as -5°C. Kanatal experiences snowfall in winters due to its average elevation of 8500 feet. Kanatal is a sight to behold in the winter season, more so in the months of Dec- Jan. However one should avoid visiting Kanatal during monsoon.

Must Read :-  BEST PLACES TO SEE IN KANATAL 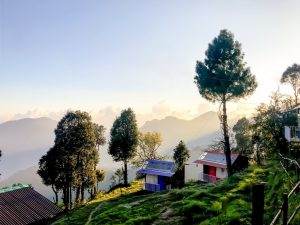 Camps in Kanatal are like little nomadic villages. There are many camps in Kanatal which offer ultimate fun opportunities around the year. For such a tiny little hamlet, during New year in Kanatal, Kanatal experiences a massive surge of people due to the amazing experiences it provides.

Camps in Kanatal will fit into any and all budgets. These camps provide exciting package offers to its visitors for a minimal cost. The payment can range from 3500/- to 7000/- based on your requirement. Camping in Kanatal (Kanatal Heights) is an amazing experience, more so during New Year

Kanatal camps, along with the accommodation and super fresh and good food also arrange for adventure activities like rock climbing, rappelling, valley crossing, zip-lining and sky bridging at very affordable prices. One also gets to meet many new people.

Winters in Kanatal are full of warmth.

These camps in Kanatal also organize Surkanda Devi Temple Trek and Kodia Jungle Trek. At night, one can do star gazing and think how dreams finally came true.

During New year in Kanatal , along with the adventure activities, camps also organize DJ night on 31st December, Live Guitar on the evening of the eve, unlimited evening snacks and fun games. Every evening during your stay in Kanatal , they also organize a Bonfire and play local garhwali music for you to groove on.

Places to visit in Kanatal: 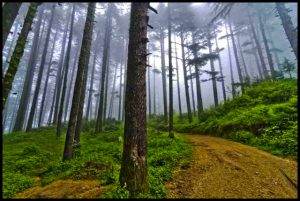 There are many mesmerising places to visit in Kanatal. Surkanda Devi Temple is one such scenic spot from where you can spot Bandar Poonch, Kala Naag and Meru-Sumeru peaks. Given the height of Kanatal , you are surrounded by the mighty Himalayas and overwhelmed by the beauty around you.

Tehri Dam, which is the highest dam of India and one of the highest in the world is also located near Kanatal . It is built on the Bhagirathi River and helps in irrigation of the mountain people of Kanatal  and surrounding areas. The view of and from the Tehri Dam is magnificent.

Many activities like Jetskiing, Water zorbing, rafting and jet ski riding are encouraged on the lake near the dam. Kodia Jungle Trek is also one of the places to visit in Kanatal. Sunset Point is Kanatal  is a perfect spot for an evening for introspection and looking inside yourself. The bright orange sun setting behind the those mountains will stay with you long after you have left Kanatal . A new year than began in Kanatal has immense potential. Amidst the beauty, you realise how beautiful and worthy you are.