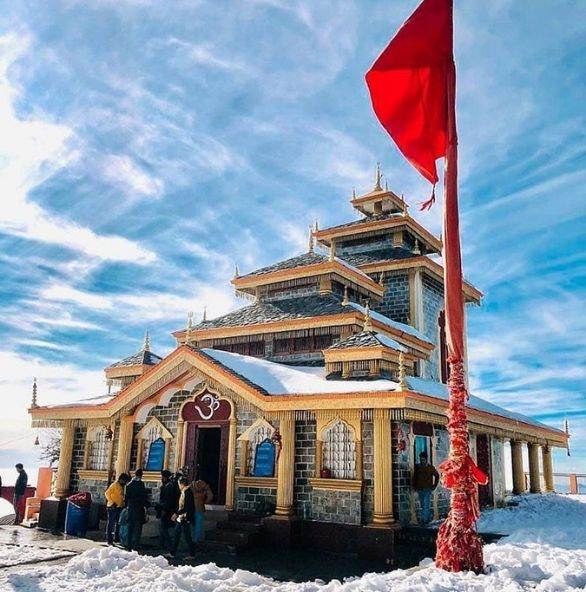 Kanatal is a small village in the state of Uttarakhand. Kanatal is 78 km from Dehradun (capital of the State Uttarakhand), 38 km from Mussoorie and 12 km from Chamba. It is on the Chamba – Mussoorie road and nearly 300 km from Delhi. Kanatal has an average elevation of about 8500 feet (2590 meters).
The highest point is Surkanda Devi Temple, at a height of about 9,995 feet. Water is scarce in the region. Kanatal is conveniently connected by road to Delhi and major cities. A few decades ago there used to be a lake by the name of Kanatal; now it dried up and hence the name Kanatal, literally meaning “one eyed lake” in Hindi.
To make it memorable, the place was named Kanatal and our stay called Kanatal Heights, kanatal heights is best place for adventure lover and nature lovers both. It is situated at the height of 8400 feet’s near to Dhanaulti .

All about Surkanda Devi tour :-

Surkanda Devi Sanctuary is an arranged at a slope top around 8 kms from Dhanaulti, Kanatal and around 22kms from Chamba in Uttarakhand, covered with thick backwoods all around at an elevation of 2,750 m.

This sanctuary is one of the 51 shakti peeth found all around the India, devoted to Goddess Surkanda. A grand perspective on the encompassing locale is presented by the spot.

The sanctuary offers 360-degree picturesque perspective on adjoining Himalayan pinnacles, whole Garhwal valley and Dehradun valley and is popular for its design and the area.

The journey is around 3 kms which would require 1 hour to arrive at the top. It is so steep eventually that it isn't prompted for weakhearted or genuinely unsuitable individuals, particularly the people who have Asthma issue.

As you cruise by, you stop for a few soda pops or snacks at the halfway slows down. Because of the thick woods all around, (trees of Rounsli) the sanctuary is covered with haze limit of the season.

One can likewise take a mountain course for the sanctuary with the assistance of neighborhood guide as that course isn't taken by the guests.

The course is a touch more intense and longer as it will require about 2 hours to arrive at the sanctuary. however, the whole journey would hypnotize. The expressing "strolling on mists" will have an alternate sense through and through.

According to the Folklore the beginning of the sanctuary can be ascribed to Goddess Sati-spouse of Ruler Shiva and little girl of Puranic God-Lord Daksha. Goddess Sati immolated many her dad Daksha offended her better half Ruler Shiva by not welcoming the couple to the Yajna. Daksha was not content with his little girl's decision of spouse.

In temper, Sati hurled herself entirely into the fire. This made Ruler Shiva to blow his top. In a fury, he put the carcass of his significant other and performed Tandav (dance of grandiose annihilation) all through the sky. He didn't stop until the body was finished spoiled away.

To stop him, Master Vishnu followed him wherever Ruler Shiva meandered while moving. Master Vishnu sent his Sudarshan Chakra to annul the carcass of Sati and the bits of the body fell all over the district. This halted ruler Shiva and he plunked down to do Mahatapasya.

Enthusiast's trust that any place the pieces fell, that known as shakti Peeth. As per Hindu legends, there are 51 bits of Sati's body dissipated all around the Indian landmass, and Shakti Peeth, gave to strong Goddess.

At the point when master Shiva was ignoring this district en route to Kailash conveying Sati's body, her head fell where the ongoing sanctuary of Surkhanda Devi stands and because of which the sanctuary has its name as Sirkhanda which is presently called Surkhanda.

The Ganga Dussehra celebration is praised in the sanctuary with a great deal of enthusiasm consistently among May and June that draws in a ton of people. In the colder time of year season, the spot will be covered with covers of snow.

In this way, climbing during summer season that is from April to July is thoroughly examined to be the best time.

Guests need to travel around 3 kms from Kaddukhal, which is the closest town to arrive at the sanctuary. Kaddukhal is very much associated through street from Mussoorie (40 kms) and Chamba (24 kms) also, which are all around associated with different urban communities in north India including Delhi.

Dehradun has the closest railhead and air terminal. Guests can employ a taxi from that point to Kanatal and further.

In the event that you are pondering the housing than, there are different planned homestays and extravagant inns as well as visitor houses at adjacent area like Kanatal, Mussoorie, Chamba and Dehradun.

It is an excellent journey offering a stunning perspective on Himalayan pinnacles. Along these lines, don't get aback and pass up this spot since one you arrive at the top, you will be entranced.