A cold dessert mountain valley, an unfamiliar land located high in Himalayas in Himachal Pradesh- “Spiti- The middle Land”. It is well known as middle land that is the land between Tibet and India. The place till date has managed to preserve the rarest of aspects of the Buddhist Culture with some of the oldest Buddhist Monasteries and temples in the world still standing alive there.

It is one of the few unfamiliar places in the world. Only the most adventurous wanderers travel to such unfamiliar places. One of the reasons of this unfamiliarity is the height and the route that leads to the place. The Rohtang Pass, at 13,054 feet separates Spiti from the Kullu valley. Moreover, the valley and surrounding region is one of the least populated regions in India and is the gateway to the northernmost reaches of the nation. 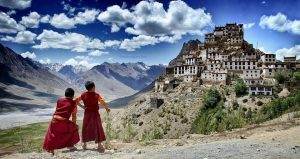 Spiti Valley is totally different from where you come. As you cross Rohtang pass the road to adventure begins. Difficult road lead to beautiful destinations. It is the drive in which will take you to a road along the river and even at a point there will be no proper road and you will have to cross in between the river. The journey is so beautiful that heights and distance won’t affect. The duration between the months of May to October is the best time to travel to Spiti Valley. The temperature is between 15-20 degree Celsius during these months, which is considered as perfect for relaxing and relishing nature.

Spiti is the place where you will realize the kindness of nature. The connecting road from Manali is considered as one of the roughest roads in the whole world. This road is closed during the winter depending on the first snowfall. The valley is likewise cut off from the north up to winter months of year due to heavy snowfalls.

Spiti is a paradise for adventure enthusiast, with a number of trekking tracks that travelers can choose from. You can choose the best travel spiti valley tour to make your trip memorable. Treks starts from Kaza to various peaks from where you can get eye catching viewof the Himalayan mountains.

The distance between Delhi to Spiti Valley is 741 kilometer and expected travel time is 15 hours to 16 hours. Though there is no direct bus. But you can travel by your car, bike or hire a tempo traveler to reach Spiti valley. There 2 routes to reach the spiti valley,

The nearest airport to spiti valley is in Bhuntar, near Kullu, 245 km away or Chandigarh International airport which is 522Km away from the same. 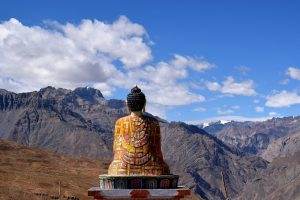 Spiti valley is different from rest because of landscape, less crowd and culture. Even your camera won’t be able to capture what your eyes could. Be alert and enjoy the calmness of nature. Spiti valley road trip should be on top of your bucket list when you next plan your travel.