Churi-Chandni Dhar (bangles of snow), or commonly known Churdhar Peak Trek, located in the Sirmour district of Himachal Pradesh. It is at 11965 feet, with some of the most great and beautiful landscapes in the region. These Himalayan slopes are covered with a treasure of herbs and beautiful alpine flora. A 5000-year-old shiva Temple and a shivling resides at the churdhar peak situated at the height of 3647 Meters above sea level, which is considered a religious pilgrimage site for locals. A wide variety of explorers come every year to offer their prayers in this temple seeking the lord’s blessing.

The mountain is surrounded with a 56 square km forest sanctuary, along with barren rocks and amp. The churdhar trek is a steep hike inside a dense Deodar forest, terraced fields and gujjar pasture lands. The best thing about this trek is that it is surrounded with lots of greenery. That is one of the best things about the trek and make it worth for trekkers. 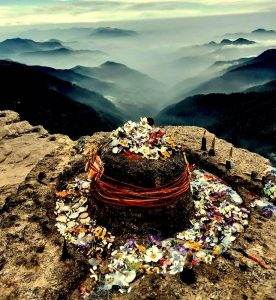 The trek starts from churdhar, which is the nearest road if you are coming via taxi or your won vehicle. The nearest bus station is Solan ISBT, which is well connected with all other states of the country. Churdhar also has a bus stop with only a limited number of buses arriving and departing. Chandigarh railway station and solan railway station are the nearest railways station, if you choose to come via railways.

Delhi to Churdhar via NH44

It is around 390 Kms from Delhi. Starting on NH1 from Delhi, continue on the same route till Ambala and then ahead on to NH 22 to reach Shimla. From there take a right turn towards Rajgarh Road. Continue on the road till you reach Nauradhar. It is the starting point of the trek to Churdhar.

From Chandigarh one needs to drive to Solan on the route to Shimla and then take a right to Rajgarh road. Within few hours, you will reach Nauradhar, which is the starting point of the trek to Churdhar. It is a 16 km walk to the top, from Nauradhar.

Haripurdhar, Nohradhar and Chaupal are the basis for the trek to Churdhar peak, among which Nohradhar is the most popular base for the Churdhar trek.

Best Time to Visit to Churdhar 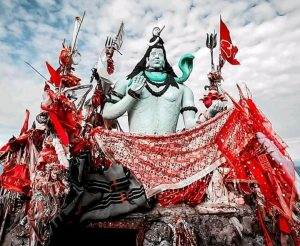 Churdhar can be visited anytime in the year expect monsoons. The weather is pleasant all over the year. When you can totally soak in the experience and not worry about hassles, would be the best tome to experience Churdhar trek.

Weather in January and February: With an average temperature 7 degree Celsius, during this time afternoon are cooler and bit chilly evenings. It is advisable to carry woolen.

Weather in March: March is considered as the perfect time to roam around Churdhar city for casual sightseeing, as the temperature ranges from 0 degree Celsius to 28 degree Celsius.

Weather in April: April is considered as the best time to visit Churdhar as the weather is Warm and pleasant with an average temperature of 19 degree Celsius, which is perfect to go and explore the place.

Weather in May: The air during this month is quite dry and the temperature ranges between 21 degree Celsius to 34 degree Celsius. You might carry a bottle of moisturizer along with you. It is a proper tourist season.

Weather in June-July: These months are considered as humid because of monsoon season. The weather is pleasant but it is not ideal time for trekking due to rainy season.

Weather in August-September: the temperature ranges between 10 degree Celsius to 31 degree Celsius, average being 20 degree Celsius. Although the weather is humid, but it is not that hot that you cannot roam around the city.

Weather in October- November: The weather is nice and humid with the lowest temperature being around 2 degree Celsius and the warmest being a usual 28 degree Celsius. It is one of the best times to visit Churdhar. 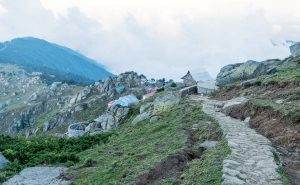 Trekking is one of those activities which will make you learn many things about life and not only about life but about your own self. Churdhar trek is among those treks which is in the bucket list of every traveler. Churdhar peak is highest peak with an altitude of 3647 meters, in the outside Himalayan Range. Forest Sanctuary, breath taking view are some points that make the Churdhar trek an overwhelming trek for mountain lovers.

Briefing about the trek:

Initially the track is steep through grassy and rocky path. After that easy and moderate slopes. The last part of the trek is very steep. But also the last one hour of the trek is fascinating as you leave the forests behind. Once reaching the summit, the views are stupefying. On a clear day you can see all the way till Badrinath and Kedarnath, The Gangetic basin, Sutlej River, Shimla, Chail, Kufri, Kasauli & Chakrata.

The total trek distance is 36 Kms which would take around 2 days to complete the trek, which starts from Nohradhar. The overall trek is on moderate level. It one of those treks which you should do once in you life time to experience something different.

So, what are you waiting for?? Book your trek now!!